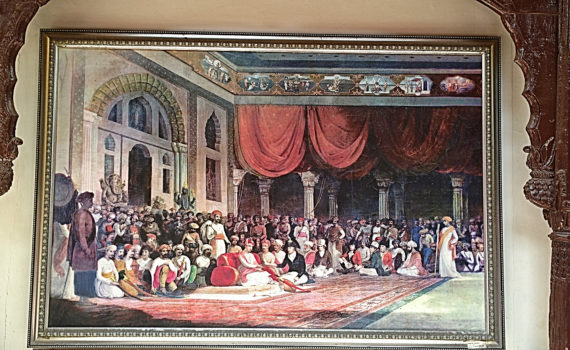 On my Pune travel diaries, i visited to Shaniwarwada, and absolutely loved it.

I happen to see an ancient historic painting commissioned by Sir Charles Malet, which was painted by James Wales and Thomas Daniell portraying the conclusion of an alliance of the Maratha Regime with the East Indian Company in 1790 against Tipu Sultan.

This historic painting depicts the scene of the Royal Court of the young Sawai Madhavrao Peshwa ( 1774 – 1795) of the Maratha Empire.

Nana Phadanvis, the chief administrator is on the Peshwa’s left side while Sir Charles Malet in the European costume, is presenting the treaty papers to Sawai Madhavrao.

Sir Charles Warren Malet (1752 – 1815) of the East India Company was the British Resident at the court of the Peshwas in 1795. Here he has just concluded an alliance with the Marathas against Tipu Sultan, signed on 6th August 1790.

Sir Charles Malet was the one, who introduced James Wales to the Peshwa court. In 1792, James Wales painted a full-length group of the Peshwas receiving visitors with the Chief Minister and attendants.

He planned to expand this into a “Great Treaty Durbar Group” showing Malet concluding a British alliance with the Peshwa in 1790 but died before he could do so. For that his friend Daniell, was commissioned by Malet to realize the work.

This was an opportunity to address modern events, portraiture, costume and custom as well as architecture on the monumental scale of history painting.

It appears that Daniel has assimilated contemporary Indian taste for detail and description ans succeeded beyond imagination to reflect the court of the Peshwa grandeur magnanimity, power, court discipline, custom, ceremonial attire of the young Peswa, his aristocrats, noblemen, remarkable architecture, beauty of the paintings of Hindu theory of evolution, ceiling, huge one piece carpet and so on.

In other words, Daniell created a landmark painting of the defendants of Hindu Kingdom and the house of Peshwa at the commanding center position.